in Uncategorized
by admin
0 Comments 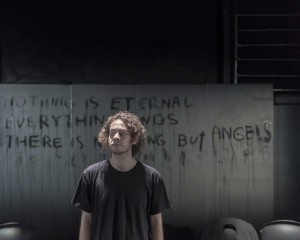 Sina Gilani in The 20th of November by Lars Noren, photo by Jeremy Mimnagh

This post was originally published on the Buddies in Bad Times blog.

With each production that I create, each new play that I workshop, and each play that I read, I begin with the question, why theatre? Over the years of asking myself “why theatre?”, I have come to identify seven primary human needs[1] that I believe the theatre satisfies. In Hebrew, the word seven is from a root word meaning to be “complete or full”. I believe that the theatre, in meeting these seven needs, completes our humanity.

I often choose plays that venture into uncomfortable or unknown territory. I am driven by the desire to find new approaches to performance, to present alternative points of view, to question established norms and to push boundaries. As I delve into the unfamiliar, this list is my anchor. It reminds me that the pursuit of theatrical innovation is, in fact, an attempt to reengage with the original power of the theatre and to renew this gloriously ancient form. The original definition of the word “radical” is relating to, or proceeding from a root – this is my work as a director.

[1] Special thank you to Anne Bogart for inspiring the format of this list and thank you to the countless mentors, thinkers and collaborators who have led me to these notions.

Sorry, the comment form is closed at this time.